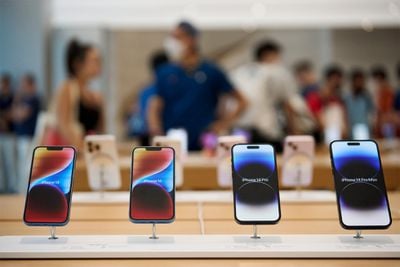 Apple is calling off plans to increase production of its latest iPhone 14 series after an anticipated surge in demand failed to materialize, Bloomberg reports, citing sources familiar with the matter.

Apple has reportedly told suppliers to rein in efforts to increase ‌iPhone 14‌ assembly by as much as 6 million units in the year's second half. Apple had upgraded sales projections in the weeks leading up to the launch of ‌the iPhone 14‌, but the actual demand was not as high as expected.

As a result, Apple will aim to produce 90 million handsets for the period, around the same amount it produced in 2021 and line with Apple's original forecast this summer.

As we've heard in the last couple of weeks, demand for iPhone 14 Pro models is stronger than the lower-priced iPhone 14. Apple has reportedly told one supplier to shift its production capacity from entry-level iPhones to premium models.

China's economic slump is also impacting Apple's sales, with purchases of ‌iPhone 14‌ models in the first three days of availability said to have been down 11 percent on last year's iPhone 13 series.

More widely, surging inflation, recession fears, and the war in Ukraine impact the global demand for consumer electronics. The smartphone market is expected to shrink by 6.5 percent this year to 1.27 billion units, according to figures quoted by Bloomberg from market tracker IDC.

According to Bloomberg, Apple is not anticipating a drop in iPhone sales in 2022 amid an overall smartphone market slowdown. The Cupertino company is expecting continued strong demand for the iPhone and has asked suppliers to make 90 million iPhone 14 models, which is on par with iPhone 13 manufacturing at the same time last year.
Apple is expecting to manufacture approximately 220 million …

iPhone 14 Suppliers Reportedly Feeling Uncertain About Demand Ahead of Launch

Suppliers for the upcoming iPhone 14 reportedly feel uncertain about the high demand for Apple's flagship lineup, according to supply chain sources speaking to DigiTimes.
A paywalled preview of a full story set to be published tomorrow says, “uncertainty remains about the demand for the new models between the end of the fourth quarter and the beginning of first-quarter 2023.”…

Strong iPhone 14 Pro model sales could see Apple stabilize its market share for high-end handsets at 60% if the enthusiastic consumer response continues through the year.
According to DigiTimes, this year, Apple's market share for high-end handsets with unit prices of over $500 has reached 55% in the off-season and 60% in peak season, but iPhone 14 Pro sales could see their peak season…

In contrast to faltering Android devices, DigiTimes reports, Apple has scaled up its orders for iPhone 14 components.
Ahead of the launch of the iPhone 14 lineup in September, Apple has reportedly increased its component orders from suppliers. This contrasts with a range of Android brands, which continue to face sluggish sales, according to supply chain sources speaking to DigiTim…

Apple is reportedly scaling back production of the new iPhone 14 due to seemingly low demand for the latest iPhone, which features the same design as last year's iPhone and a one-year-old chip. According to supply chain employees who spoke to ITHome, Foxconn, Apple's largest supplier, has been instructed to dismantle at least five production lines that were previously making the…

Bloomberg reports that Apple plans to produce roughly 220 million iPhone units in 2022, a production target that is mostly unchanged from the previous year despite supply chain constraints and expected high demand for new iPhones this fall.
Apple has reportedly told its suppliers that it still wants to make up to 220 million iPhone units this year, a target that is less than what market experts…

Six Major Products to Expect From Apple in 2023

As we approach the end of a busy product release season for Apple, with only new iPads and Macs left to be announced over the next month, we're also setting our sights on 2023. Apple is rumoured to have several major products in the pipeline for next year, including new Macs, a new HomePod, a VR/AR headset, and so much more.
Other than new iPhones and Apple Watches, which are expected…

Gurman: New iPads and Macs May Be Announced Through Press Releases, No October Event

Apple may decide to release its remaining products for 2022, which include updated iPad Pro, Mac mini, and 14-inch and 16-inch MacBook Pro models, through press releases on its website rather than a digital event, according to Bloomberg's Mark Gurman. In his latest Power On newsletter, Gurman said that Apple is currently “likely to release its remaining 2022 products via press releases,…

Earlier this month, Apple announced that iOS 16.1 would enable a new Live Activities feature that allows iPhone users to stay on top of things that are happening in real-time, such as a sports game or a food delivery order, right from the Lock Screen. On the iPhone 14 Pro and Pro Max, Live Activities also integrate with Dynamic Island.
Premier League match in Dynamic Island via Paul Bradford …

Today marks exactly two weeks since Apple released iOS 16 to the public. Besides the personalized Lock Screen, major changes in Messages, and new features in Maps, the update has also seen its fair share of bugs, performance problems, battery drain, and more.
After major iOS updates, it's normal for some users to report having issues with the new update, but such reports usually subside in…

iPhone 14 Pro customers on the Verizon network in the U.S. report issues with slow and unreliable 5G cellular connections and calls randomly dropping.
Several threads on Reddit (1,2,3) and the MacRumors forums chronicle issues faced by Verizon customers and Apple's latest iPhone. According to user reports, signal strength on the iPhone 14 Pro is unreliable and weak, while other…

Apple is gearing up to possibly replace its “Pro Max” iPhone with an all-new “Ultra” iPhone 15 model next year, reliable Bloomberg journalist Mark Gurman said today.
In his latest Power On newsletter, Gurman said that for the iPhone 15, Apple is planning a revamped design alongside USB-C and a potential name change. Apple could replace its “Pro Max” branding, which it started to use…

An Apple Watch Ultra user has modified their new device's casing to add a brushed finish and remove the orange color of the Action Button to make it more visually appealing.
The Apple Watch Ultra offers the first complete redesign of the Apple Watch since the product line's announcement in 2014, and while the design has been met with praise from many users, some have criticized…