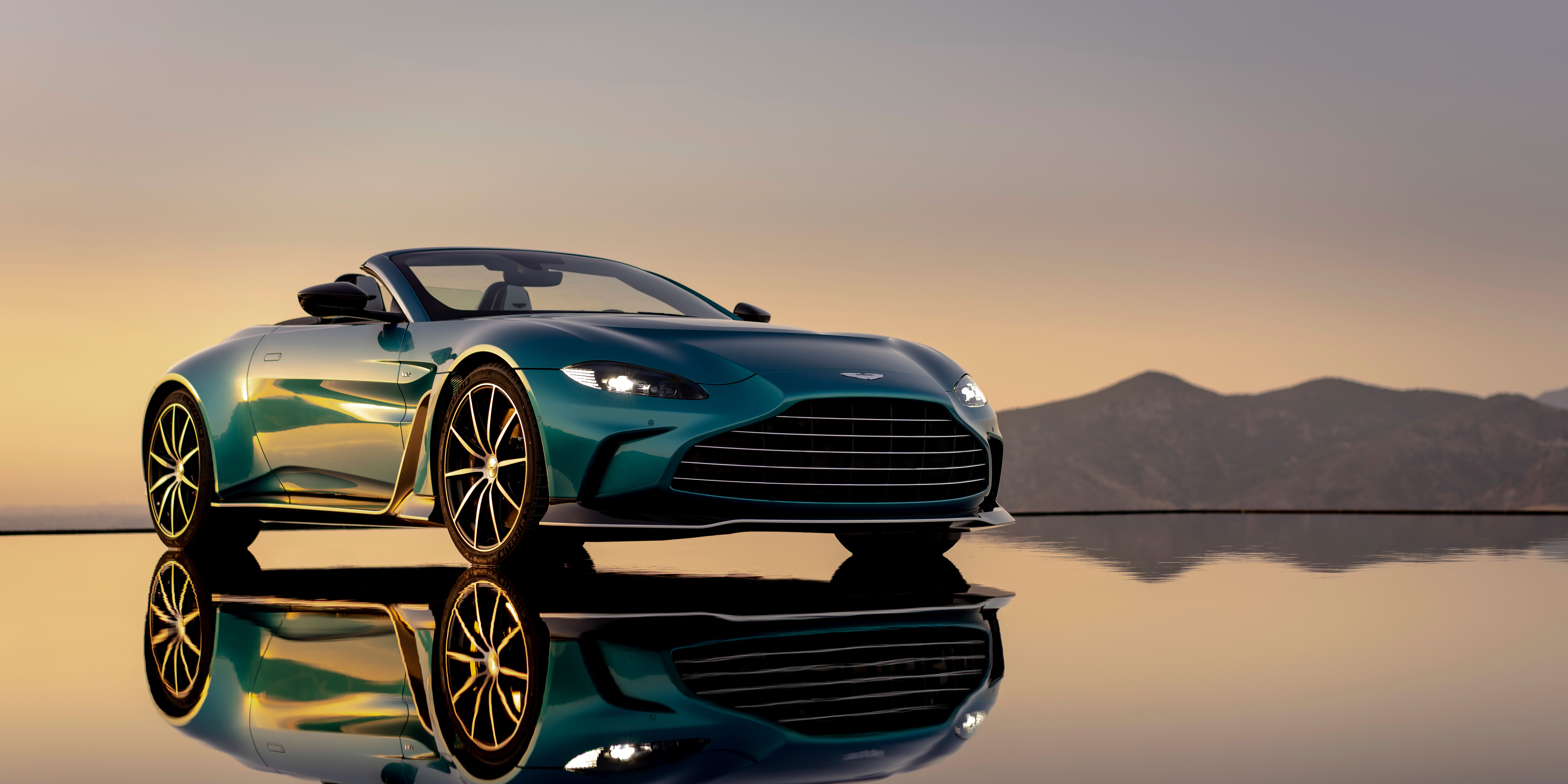 Aston Martin seems to have taken the advice of its most famous fictional brand ambassador—Britain’s leading not-very-secret agent, James Bond—and decided to never say never again. Although we were told when the V12 Vantage coupe was released that there were no plans to build a roadster version, this is very much a roadster version of the same car—one that has just been unveiled at the Pebble Beach Concours d'Elegance in California.

Anybody who bought a V12 Vantage coupe on the grounds of the exclusivity guaranteed by its 333-unit production run likely won't be pleased by the arrival of the ragtop. But the rest of us should be able to forgive Aston Martin for having introduced something so good-looking. The regular V8 Vantage roadster is already an exceptionally handsome beast, and the V12 has turned up the muscularity of the design without losing any of the grace of the basic car.

As with the coupe, fitting the sizable 12-cylinder engine has been a challenge. Aston insiders say it has been necessary to combine much of the underbody structure of the larger DBS with the Vantage bodyshell. The body of the V12 Roadster has been widened and incorporates heat vents in the fenders behind the front wheel arches, plus a reworked hood necessary to find packaging space for the motor. The hood, fenders, and sill extensions are all carbon fiber.

Mechanically, the roadster is pretty much identical to the coupe. It uses a 690-hp version of Aston’s twin-turbocharged 5.2-liter V-12 engine, the same motor that powers the larger DB11 and DBS. This is accompanied by 555 pound-feet of torque and sent to the rear axle through an eight-speed automatic gearbox and a mechanical limited-slip differential. A dual exhaust sits beneath the rear diffuser and is made from lightweight stainless steel. The full exhaust system weighs a claimed 16 pounds less than the exhaust of the V8 Vantage Roadster. We hope it sounds better without a roof than the disappointingly muted coupe did when we drove it earlier this year.

Per Aston's claims, the V12 roadster will be one of the fastest front-engine roadsters in the world, capable of both a 3.5 second 60 mph time and a top speed of 200 mph. Those figures are slightly better than the company claimed for the much more expensive windshield-less V12 Speedster that sat on the Vantage’s chassis and used the same engine.

Although it doesn't strike us as a natural track car, carbon-ceramic brakes will be standard on the V12 roadster, and it will also be offered with the option of the raised wing from the coupe. While the official images suggest that the roadster looks better without the high-level spoiler, choosing it will also allow the car to produce a claimed peak of 475 pounds of downforce.

Production of the V12 roadster will be limited to just 249 examples, making it even more exclusive than the coupe, with deliveries starting before the end of the year. There is no official word on pricing, but Aston says it has sold out the full run already, with buyers unlikely to see much change from $350,000. That’s a huge amount to pay for the smallest Aston Martin, even in ultra-exclusive form, but we are promised that this is the last time the V-12 engine will be combined with the Vantage bodyshell.