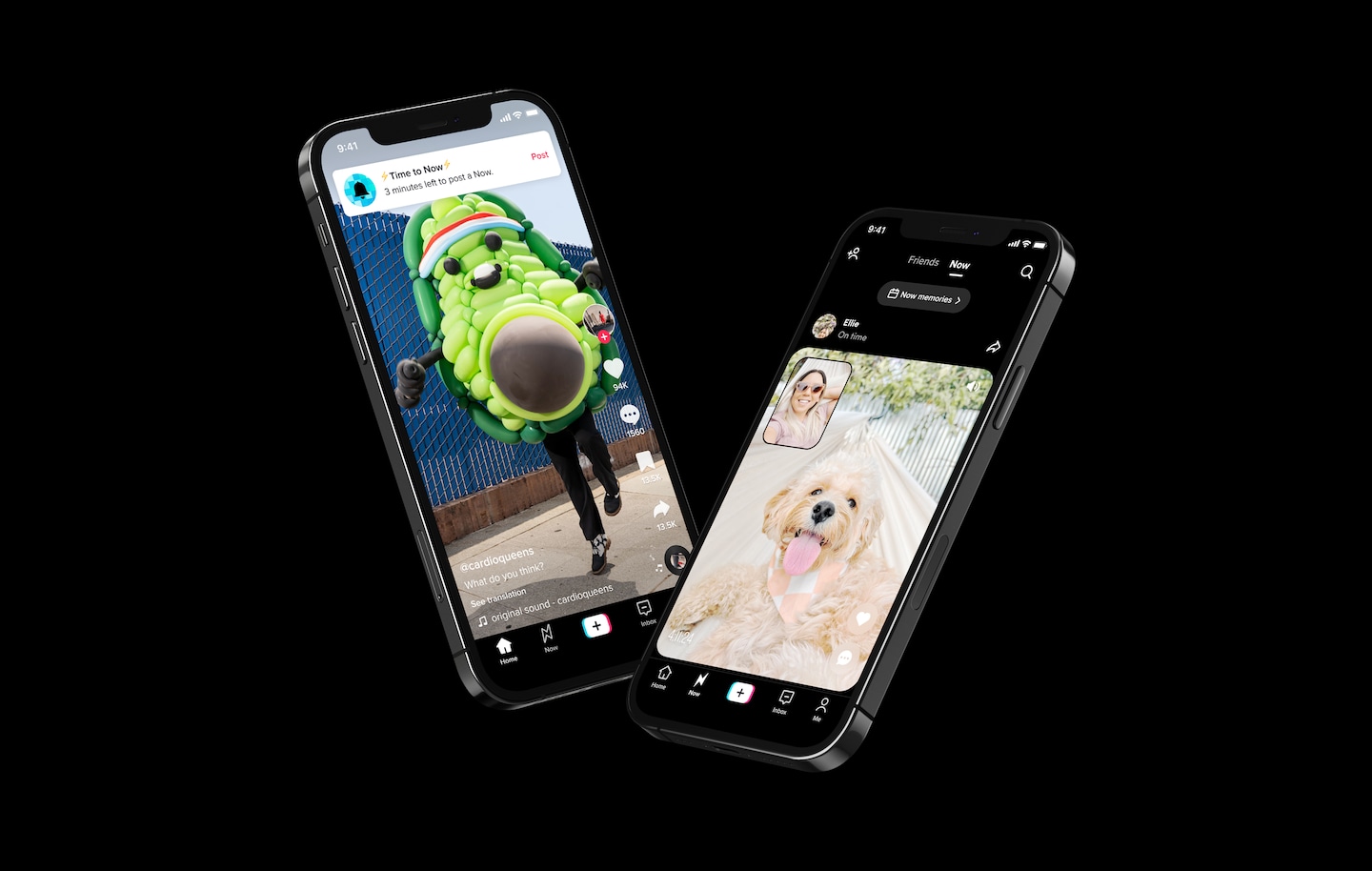 BeReal, which prompts users once per day to snap and share a quick photo from wherever they happen to be, is topping app charts with a social media experience that prioritizes spontaneous connections over image-conscious curation. The app uses your phone’s front and rear cameras simultaneously, resulting in a post that overlays a candid selfie on an image of whatever’s in front of you.

It’s also inspiring copycats. This week, TikTok became the latest big platform to respond to BeReal’s surge, announcing a new feature called TikTok Now that will give users daily prompts to share impromptu photos or short videos using the phone’s front and rear cameras. The move comes as Instagram has confirmed it is working on a similar feature, IG Candid Challenges, and weeks after Snapchat debuted its dual-camera mode.

BeReal’s success reveals an appetite among social media users for more authentic, intimate forms of expression and shows that Davids can still shake up a sector dominated by global Goliaths. At the same time, the scramble by those Goliaths to copy core features of an app that doesn’t even have a way to make money underscores the uphill battle that upstarts face just to survive.

“The incumbents fear that this becomes the next TikTok,” said Mark Shmulik, an analyst for Bernstein who covers internet platforms. “So they’ve all scrambled to launch their own version” in hopes of heading off a competitor before it goes mainstream.

Buzzy new social apps are not uncommon; many don’t last. But the speed of BeReal’s ascent in recent months puts it in a select company.

Launched in January 2020 by French founder Alexis Barreyat, a former GoPro employee, BeReal didn’t take off immediately, accruing just 2 million downloads in its first two years, mostly among French users, according to the analytics firm Apptopia, which uses statistical models to estimate apps’ popularity. This year, however, it has boomed to some 56 million downloads, with the United States becoming its top market. Its iOS app was downloaded 11 million times in August alone, making it the most-downloaded nongaming app in the world for that month, by Apptopia’s reckoning.

That “hockey-stick” growth trajectory is on par with Snapchat in 2011 and Clubhouse in 2020, Apptopia vice president Adam Blacker said.

Like Snapchat before, BeReal presents itself as a refreshing alternative to the big social media platforms, with their addictive feeds, polished content, and professional influencers.

Teens still love Snapchat. But its business is struggling to grow up.

Users receive a notification on their phones once daily, at an unpredictable time chosen by the app, informing them that it’s “Time to BeReal.” They then have just two minutes to snap a photo, showing the view from both their phone’s front- and rear-facing cameras. Late posts and retakes are allowed but frowned upon; while the app doesn’t display popularity metrics such as friends or likes, it does show your friends how late your post was and how many times you retook the shot.

The photos that result are, compared to a typical Instagram feed, aggressively mundane. Many show unkempt users cooking, driving, working at their computers, or simply lying in bed looking at their phones. Critics have derided the app as “boring”; it defenders say that’s just the point.

“They’ve certainly caught lightning in a bottle with an idea,” Shmulik, the Bernstein analyst, said of BeReal. Now comes the hard part: growing amid fierce competition from far larger platforms that can offer similar features to existing user bases that dwarf BeReal in scale.

Most of BeReal’s features appear relatively easy to duplicate, Shmulik noted. So if its appeal lies primarily in its clever and fun product design, the app may struggle to fend off larger rivals.

TikTok Now looks like nearly a clone of BeReal, copying both the dual-camera mode and the idea of prompting everyone to take a snap simultaneously each day. Instagram hasn’t launched Candid Challenges, but screenshots spotted by a developer suggest that it, too, will work very similarly to BeReal. Snapchat adopted the dual-camera idea, but not the daily prompt.
On Thursday, when TikTok announced TikTok Now, BeReal posted the “eyes” emoji on its Twitter account. TikTok and Instagram both declined to comment for this story.

While BeReal’s default view shows only your friends’ posts, a “Discovery” tab lets you peruse the recent public BeReals of users worldwide. Unlike TikTok’s “For You” page, whose vaunted personalization algorithm fills your feed with the videos most likely to keep you hooked, BeReal makes no effort to surface popular or relevant posts. To scroll through it is to be reassured that folks in Norway, Croatia, and the Canary Islands are leading quotidian lives just as unremarkable as yours.

BeReal declined to comment on this story. In a fact sheet for media, the company says its philosophy is “to create a candid and fun place for people to share their lives with friends.” It adds: “We want an alternative to addictive social networks fueling social comparison and portraying life to amass influence.”

TikTok, owned by deep-pocketed Chinese parent company ByteDance, grew in part by spending heavily on advertisements for its app on rival platforms, including Instagram and Snapchat. BeReal has raised money from major venture capital firms, but so far, it seems to be growing more by word of mouth, thanks partly to an “ambassador” program to fuel growth on college campuses.

In a sign of the ballooning interest in BeReal, a popular Twitter account previously known as “Songs that go hard” rebranded on Sept. 8 as “Best BeReals,” tweeting amusing or surprising BeReal posts from public accounts. Within four days, the account’s followers more than doubled, from 125,000 to 325,000, according to the account’s owner, who spoke anonymously.

On Friday, a fan asked singer Harry Styles to take her BeReal at his Madison Square Garden concert. He complied, and videos and photos from the encounter went viral on other social platforms — though not on BeReal itself, which has no mechanism for amplifying popular content.

There is one aspect of BeReal that Big Tech can’t replicate: not being part of Big Tech (at least not yet). If people are using it as an antidote to the addictiveness of TikTok, the impersonality of Facebook, or the performative pressure of Instagram, it may have staying power after all. Perhaps it will even live long enough to see itself become one of the incumbents, scrambling to copy the next hot app.