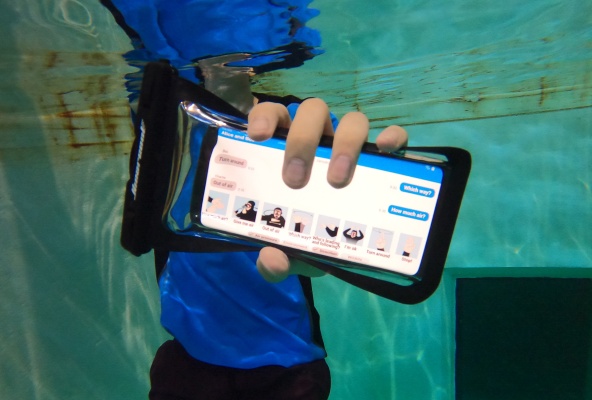 Don’t you hate it when you lose signal entirely after going just five or 10 meters underwater? Now, researchers at the University of Washington address this vexing limitation of modern technology. They have made an underwater communication app that uses sonic signals to pass messages to your other submerged friends. Millions could use this tech in recreational and professional diving situations.

The communication problem underwater is simple: Radio waves are absorbed by water. As a result, no signal our phones send or receive can travel more than a few inches without being wholly lost. That’s one reason submersibles and the like need a tether: to pass data back and forth to the surface.

On the other hand, sound waves travel through the water quite readily and are used by countless aquatic species to communicate. Not humans, though — because the way we make sound only works well in air. So for as long as anyone can remember, divers have communicated with one another using hand signals and other gestures.

Professional divers will have a vocabulary of dozens of signals, from “low on air” to “danger to your right” and anything else you can imagine coming up during a dive. But you have to learn those and see them when they’re used for them to work; you can bet at least some divers wish they could tap out a message as they do above the waves.

That’s the idea behind AquaApp, a software experiment by the Mobile Intelligence Lab at UW, led by PhD student Tuochao Chen and prolific professor Shyam Gollakota.

The system uses a modified form of “chirping,” or the phone’s speaker, to create high-frequency audio signals to communicate data rather than radio. These have been done before, but not (to my knowledge) in such a simple, self-correcting way that any smartphone can use.

“With AquaApp, we demonstrate underwater messaging using the speaker and microphone widely available on smartphones and watches. Other than downloading an app to their phone, the only thing people will need is a waterproof phone case rated for the depth of their dive,” said Chen in a UW news release.

“For example, fluctuations in signal strength are aggravated due to reflections from the surface, floor and coastline,” said Chen’s co-lead author and fellow grad student, Justin Chan. “Motion caused by nearby humans, waves and objects can interfere with data transmission. We had to adapt in real-time to these and other factors to ensure AquaApp would work under real-world conditions.”

The app constantly recalibrates itself with a handshake signal that the phones can easily hear and then report the characteristics. So if the sender’s tone is received, but the volume is low, and the high end is attenuated, the receiver sends that information. The sender can modify its transmission signal to use a narrower frequency band, more power and so on.

In their on-site experiments in lakes and “a bay with strong waves” (probably Shilshole), they found that they could reliably exchange data over 100 meters — at very low bitrates, to be sure, but more than enough to include a set of preprogrammed signals corresponding to the old hand gestures. So while some (including myself) may lament the loss of an elegant and human solution to a longstanding problem, the simple truth is this might make dangerous diving work much safer or let recreational divers communicate more than “help” and directions.

That said, diving is a pastime and profession steeped in history and tradition, and it’s doubtful that this digital communication method will supplant gestures — an analogue, the self-powered alternative is precisely the kind of thing you want ready as a backup if things go sideways.

AquaApp’s code is open source and free to use — take a look and try it yourself at this GitHub repo.