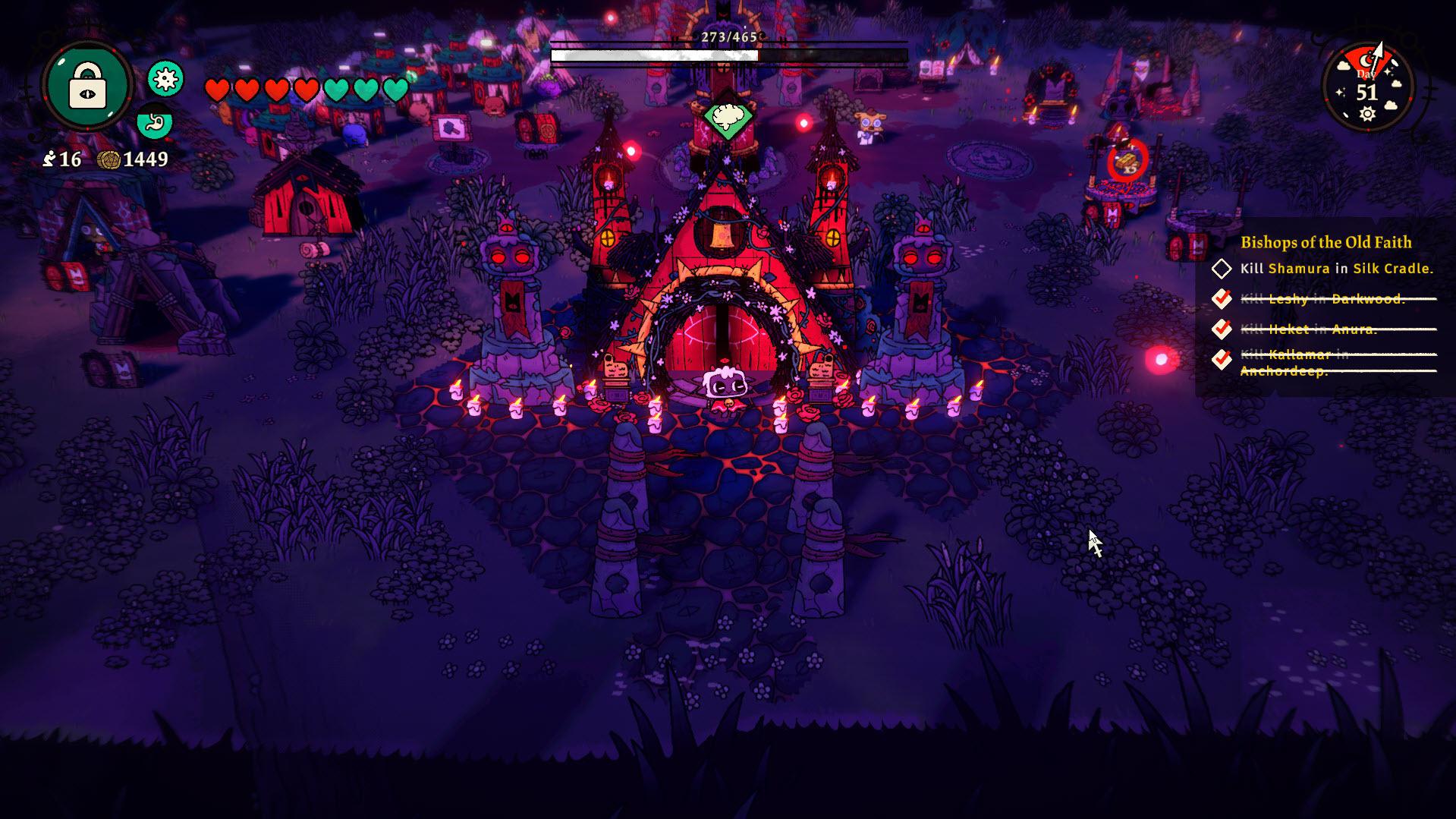 Cult of the Lamb has been released this week, a combination of Animal Crossing and Hades with some Binding of Isaac thrown in for good measure. It’s a lot of fun, and I’ve been hacking my way through enemies and building up my cult compound for a few days now, and I feel like I’ve come across enough advice that I wanted to write this post for newer players.

Here are five things I wish I had known when I started Cult of the Lamb.

This section was originally titled “don’t get attached to your favorite cult members” because, as you will soon learn, everybody dies. Even if they don’t starve or die from sickness, all cult members will eventually get old, stop working, and then die one day. However, you are a supernatural cult, so there is a clear remedy to this, a ritual that you will eventually unlock that will allow you to resurrect dead cult members. It costs a good amount of bones and will freak out your other members a bit, but that’s a small price to pay for keeping your OG members around.

For my money, two of the best upgrades for your entire cult are the ones that halve the cost of your Rituals, and then above that, halve the cooldowns, as otherwise they are crazy expensive and take forever to come back. Certain rituals you will want to be able to run more or less constantly, so it’s a good idea to have these available whenever you need them and not to spend a million bones from Crusade runs in other to do them.

Without question, my favorite slate of buildings is in this row which is the Outhouse, Janitor Station and Healing Bay. Between all three of these, there will be far, far less disease in your camp, and you will not have to go around cleaning up follower poop in the woods. Most of the time, people will use the outhouse; if not, you can have a janitor clean up poop and vomit for you. That’s no job for a cult leader, after all. If people get sick (and can be cursed into sickness or eat bad food), the healing bay cures them more or less instantly.

4. Always Backtrack To Other Rooms In Crusades

What I mean here is that if you have a map with two paths after you beat enemies in a room, pick one path and see where it goes. If it’s another similar path, with more enemies with another exit or two, you will want to backtrack after everything is dead and go to the room you did not visit. Almost every time, this will be some sort of bonus room for weapon upgrades, tarot cards, or offering stations. And the more of those you get, the easier all your Crusade runs will be.

5. The Best Ritual Of All Time

The most overpowered Ritual I’ve found in the game is Ritual of Enrichment. You can extract a few coins with tithes from your cult members; you can find dozens of coins on Crusade runs. But this ritual? From my medium-sized cult, it has been pulling in six hundred coins at a time, at only the cost of some faith, which is easy to restore. This almost breaks the economy of the game, as it took me from never having enough coins to having more than I really can ever spend. It’s weird to talk about nerfs in a game like this, but it… may get nerfed, so use it while you can.

Those are my suggestions, have fun! Praise Lamb!