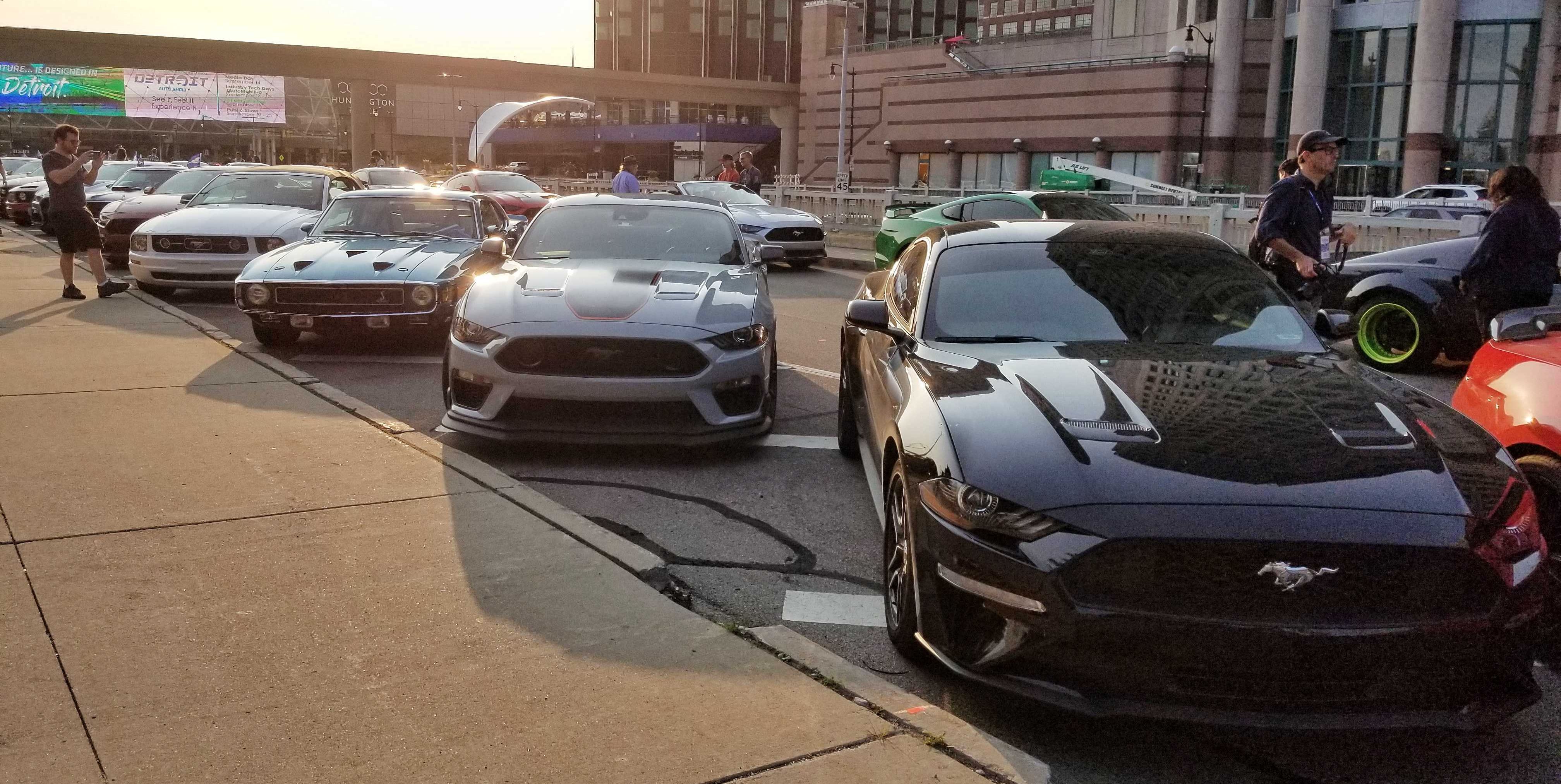 As Ford Mustang fans and owners alike prepare for tonight's reveal of the new seventh-generation car, Mustangs from the past and present have lined the streets around the Detroit auto show as part of Ford's “Stampede” event. The large-scale public party started about a week ago, on September 6 in Tacoma, Washington. From there, owners and enthusiasts traveled together across the country, making 12 stops to their final destination in Detroit, Michigan.

At the Detroit celebration, we sought out owners of all six Mustang generations and captured photos of their beloved ponies. Among the models we photographed are a replica '67 Shelby GT350 with some real Shelby parts, an immaculate '78 Mustang II King Cobra, and an '07 GT with a sweet underhood paint job. Read on for details and photos.

All about the 2024 Ford Mustang

This 1967 Mustang Shelby GT350 is a clone and owned by Greg Csernai. It features a Boss 302 engine mated to a five-speed manual. Despite being a replica, it has some actual Shelby parts, such as a steering wheel, roll bar, rims, and brakes. “It's great! My car's the only '67 or '68 in the whole thing,” said Csernai.

Unfortunately, we could not track down the owner of this immaculate 1978 Mustang II King Cobra. However, its build sheet was posted inside, and we saw some of its features. With a 302-cubic-inch V-8 and a four-speed manual, this second-gen car has T-tops, radials (size 195/70) with raised white lettering, and a digital clock! It was built at the Dearborn factory on May 5, 1978.

Alan Macdonald owns this 1989 Mustang GT. The black Fox-body car is mostly original, apart from some new parts and an aftermarket center console with cupholders and a USB port. Macdonald, who hails from Michigan's Bloomfield Township, said he's owned his '89 GT for about five years and is saving up for an S550.

This 2002 Mustang GT is owned by someone who goes by @bbdrifting on Instagram. As his name suggests and the photo shows, this fourth-gen car has been heavily modified for drifting. We're told he bought the car when he was 16 years old, after saving since he was five, and that he has modded everything from the rear end to the engine. The latter is a 4.6-litre V-8 that's been stroked to 5.0 liters and turbocharged. It's said to make roughly 700 horsepower.

Tony Gulley owns this 2007 Mustang GT. Its decorative paint was airbrushed under the hood and on the seats, dashboard, and door panels. Regarding the Stampede event, Gulley told us: “I think this is wonderful. I'm so glad Ford could do something special for the next generation.”

Mike Magri owns this 2015 Mustang GT. This sixth-generation Stang has been modified with a body kit, an aftermarket grille, and two rear spoilers. Its interior is customized too. Magri said he's “having too much fun right now to think about picking up the new one.” This 2015 is his sixth Mustang, all of which he's liked. Not only does Magri drive it daily, but he also says he's driven it through five Michigan winters and takes it drag racing.