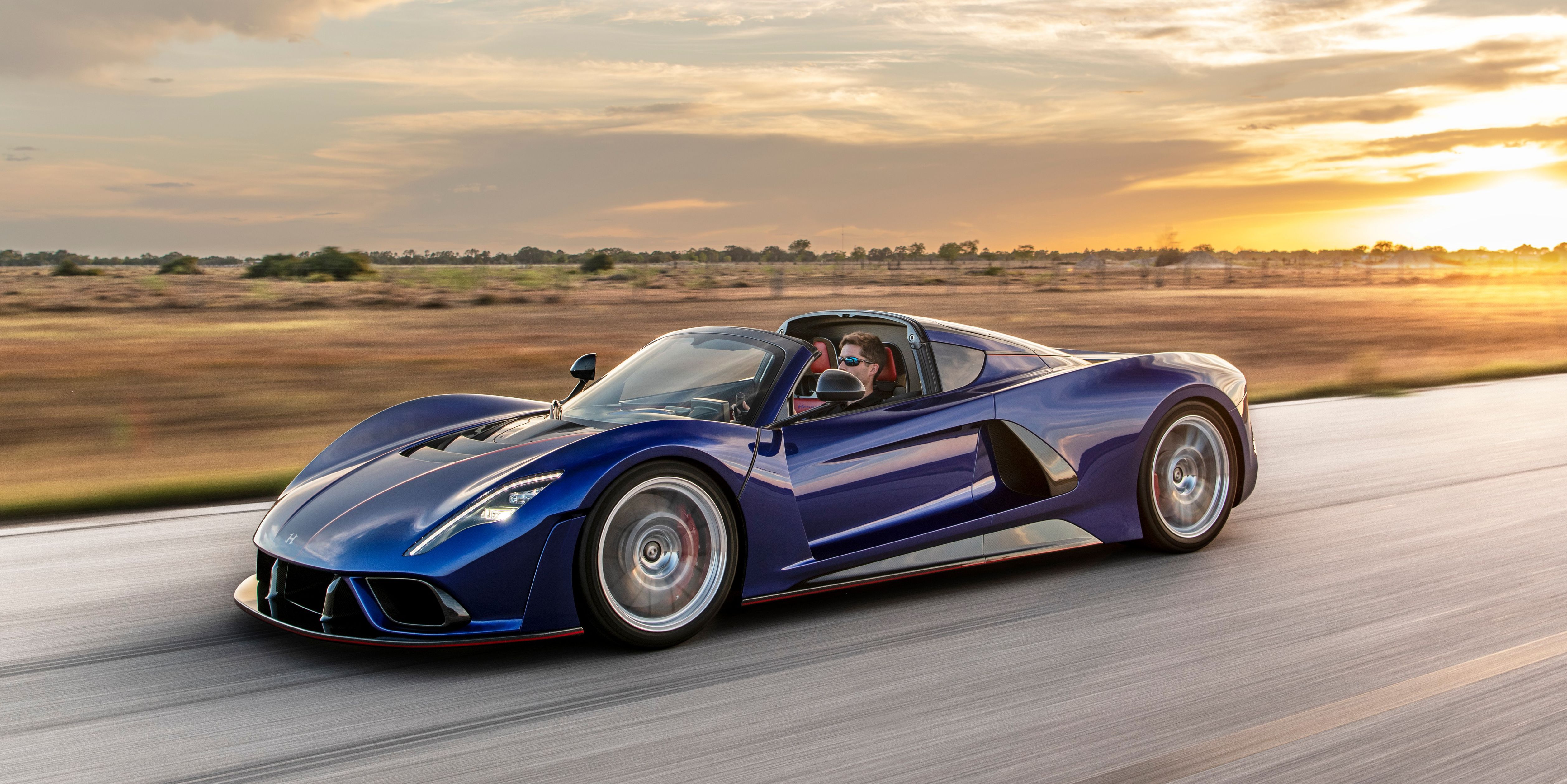 Monterey Car Week has long been famous for the chance to see some of the world’s most historic and exclusive cars. But the series of car-themed events in northern California serves another purpose: being an auto show for billionaires. A place where they can see new, unobtainium-grade models before anybody else and also buy them.

One of this year’s debuts is the Hennessey Venom F5 roadster, freshly unveiled at The Quail Motorsport Gathering. As its name suggests, this is a decapitated version of the existing F5, which the Texan manufacturer says will be the world’s fastest and most potent open-topped road car. Only 30 will be built, each selling for $3 million. By the ludicrous standards of Pebble Beach hypercar unveilings, the price isn't that excessive.

The roadster is based on the F5 Venom coupe and shares an identical mechanical package. This is a 6.6-litre twin-turbocharged V-8 claimed to produce an astonishing 1817 horsepower and drives the rear wheels through an automated single-clutch transmission. Hennessey says the roadster has a dry weight of just 3098 pounds—just 45 pounds more than the coupe—and that it is designed to deliver a top speed of more than 300 mph, although maximum velocity will be limited when the roof panel is removed.

The open-topped F5 is a Targa rather than a full cabriolet, with a lift-out section between the windshield rail and the raised rollover structure behind the seats. The panel is made from carbon fiber and weighs just under 40 pounds, meaning it should be simple for one person to remove or install it. Once decapitated, the roof can be either transported in an ultrasoft merino wool travel bag or displayed on a pedestal that will come with the car. The roadster also gets a new viewing window in its engine cover to show off the “Fury” V-8; it sits beneath a carbon-fibre panel in the coupe.

Other visual changes over the fixed-roof F5 include new forged seven-spoke aluminium wheels for the roadster, available in either a silver finish or polished aluminium and secured by titanium bolts. But the use of the same carbon monocoque as the coupe, which weighs just 190 pounds naked, means that structural strength should be almost the same, even with the roof removed. And as with the coupe, the roadster does without any active aerodynamic elements, unusual in this part of the market; downforce levels are adjusted by tweaking ride height to alter the airflow angle over the body.

The unanswered question, for now, is just how fast the F5 Venom roadster will be capable of going. Hennessey is still working to prove what the coupe is capable of. The most recent publicly released figure is 271 mph on a 3.2-mile runway in Florida. (You can see the video of that run here.)

Can It Beat the Bugatti?

While that is still short of the targeted 300-mph-plus top speed, physics suggests that both the F5 Venom coupe and roadster may well be capable of breaking that milestone, given they have more power and less weight than the Bugatti Chiron Super Sport 300+, which currently holds the production car speed record, having been driven to nearly 305 mph by British sports-car racing legend Andy Wallace in 2019. We look forward to discovering what Hennessey is truly capable of.

While the F5 Venom roadster is set to be more expensive than the coupe, which cost $2.1 million when it was announced in 2020, the open-topped car is also going to be less exclusive—presuming Hennessey manages to sell out its full proposed run of 30 cars, against just 24 coupes. Production of the roadster is set to begin by the end of the year.