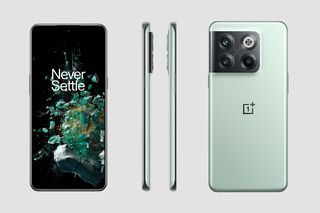 The OnePlus 10T isn’t due to launch until August 3rd, but it wouldn’t be a OnePlus phone if the company didn’t reveal a few details early. Today, we’re getting a look at the device’s exterior design, which reveals a couple of interesting (and, depending on your viewpoint, potentially disappointing) changes compared to its predecessor. Although the 10T’s overall design is similar to that of the OnePlus 10 Pro, there’s no alert / mute slider this time, nor is there any sign of the Hasselblad branded-camera system found on recent OnePlus flagships.

The alert slider has been a staple of OnePlus’ flagship phones for years, offering a quick and easy way to put its phones into silent and vibrate modes without having to tap through any onscreen menus. In an email interview with The Verge, OnePlus chief designer Hope Liu said that ditching the slider was necessary for the 10T to have enough internal space for other components needed for “high wattage charging, a large battery capacity, and better antenna signal.”

For example, to offer the kinds of fast charging speeds that OnePlus is targeting with the 10T (it’s yet to announce the spec officially, but leaks suggest that the OnePlus 10R’s 150W fast charging could make an appearance), Liu says OnePlus had to include two “charging pumps” inside the 10T, compared to just one for the 80W fast charging-compatible OnePlus 10 Pro. The company also prioritized an antenna system that includes 15 separate antennas inside the OnePlus 10T, which it says improves signal when holding the phone horizontally — a benefit when playing games online.

“While the alert slider appears to be a very small component, it actually has a relatively large impact on the device’s motherboard area — taking up 30 mm²,” Liu says. “To ensure the OnePlus 10T delivers in the areas we know our users value most… while retaining the alert slider, we would have had to stack the device’s motherboard, which would have made the device thicker.” Removing the slider was the compromise OnePlus decided to make.

Another difference compared to the 10 Pro is the lack of a Hasselblad-branded camera system — though, given the minimal impact it’s had on OnePlus’ other phones, we’re not too concerned about the omission here. OnePlus’ partnership with the camera company kicked off with last year’s OnePlus 9 Pro and mainly involved tuning the colors from the camera. This year, it added new features like support for 12-bit RAW photographs with this year’s phone. They’re neat additions but not mainstream essentials.

When I ask Liu why the Hasselblad branding had gone, he tells me it’s because OnePlus “wanted to offer an ultimate performance flagship smartphone at the device’s chosen price point,” which makes it sound like it was a necessary compromise to reach the phone’s (as yet unannounced) price tag. But Liu confirms that the 10T’s main camera will use a 50-megapixel Sony IMX766 sensor (which is technically higher resolution than the 48-megapixel main camera from the 10 Pro) and will support shooting in 10-bit color, as well as “improved HDR photography” and OnePlus’ night photography mode.

Other features Liu is willing to confirm include a 6.7-inch display for the 10T. Resolution and refresh rate have yet to be announced, but from the images, this appears to be a flat display rather than one that curves around the edges of the device. Liu also says the phone will be available in a matte black color as well as a glossy green. OnePlus previously said the phone will be powered by a Snapdragon 8 Plus Gen 1 processor.

That’s all Liu is willing to confirm for now. For a full announcement, we’re going to have to wait for the OnePlus 10T’s official launch on August 3rd at 10AM ET.