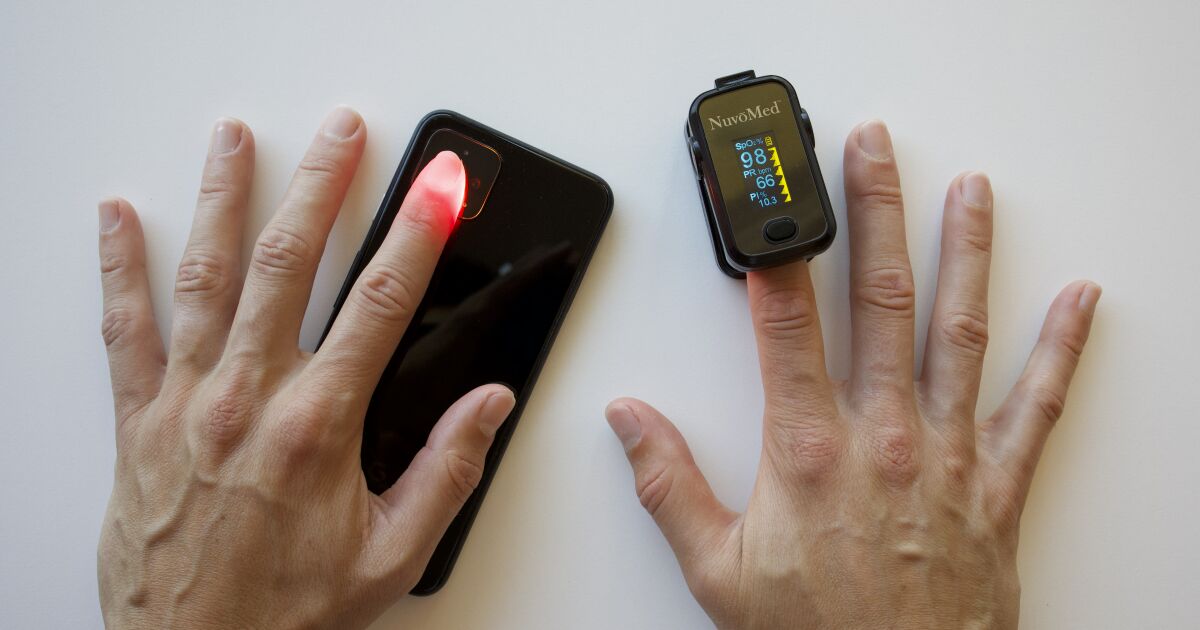 Your phone camera might have another useful feature beyond taking selfies.

Engineers at UC San Diego and the University of Washington published a proof-of-concept study that showed a smartphone could detect blood oxygen levels almost on par with the industry standard medical device.

If you’ve ever gone into surgery, you’ve likely had a pocket-sized device, a pulse oximeter, clamped onto your finger to track the percentage of oxygen in your red blood cells. This kind of oxygen monitoring was especially useful for triaging patients with acute respiratory conditions during the pandemic.

Edward Wang, a professor of electrical and computer engineering at UC San Diego and one of the study's lead authors, said a big part of what they do is to see what is possible with the tools we already have available, like a smartphone.

“The biggest difference between a medical device, how it’s made and how the smartphone-based health monitor works, is that we don’t have a perfect system, and we have to use machine learning and a lot of data to sort of helping us get to somewhere close to what would have been the perfect physical system, which is the medical device,” said Wang, who also is a faculty member of the university’s Design Lab.

For people recovering from COVID-19 or other conditions, like asthma, which can make it harder for oxygen to get to the lungs, pulse oximeters can help them with regular observation at home. When patients' oxygen level drops to 90 percent or below, they need medical attention. A healthy person has an oxygen level of about 95 percent.

In the study, the researchers used a smartphone’s camera — with the flash on — to take a video of a person’s blood flow on one finger and track it with a pulse oximeter device on the other finger. The smartphone technique uses light to capture how the amount of oxygen in our blood changes colors.

“The camera records how much that blood absorbs the light from the flash in each of the three color channels it measures: red, green and blue,” Wang said.

He explained that as oxygen binds to hemoglobin, it changes the oxygen saturation in your blood, which translates to a change in the color of your blood.

From there, they used a machine learning algorithm that tracks the pattern of changes at different oxygen levels. For 15 minutes, each participant breathed in a controlled mixture of oxygen and nitrogen to slowly reduce their oxygen levels to simulate the changes.

The smartphone used in the study detected a blood oxygen level as low as 70 percent, which is the lowest value that pulse oximeters should be able to measure, according to the U.S. Food and Drug Administration.

The study was small in scale but comprehensive as it tested the smartphone technique on six people — ages 20 through 34, and evenly divided by participants who identified as male and female. One participant identified as African American, while the rest identified as Caucasian.

Some variables, such as skin tone or muscle density, can affect the results of a pulse oximeter reading. Hence, there is more work to be done on the technology and machine learning to account for those variables, Wang said.

The researchers noted that it would be a while before this smartphone technique could be widely used in households or clinics via a smartphone app. However, part of what they are doing is showing how these kinds of tools can be made more accessible, Wang said.

The study was published in the npj Digital Medicine. Four authors, including Wang and Varun Viswanath, an electrical engineering student at UC San Diego, are inventors of the patent application for the technology behind the algorithm that makes the smartphone technique for pulse oximetry possible.